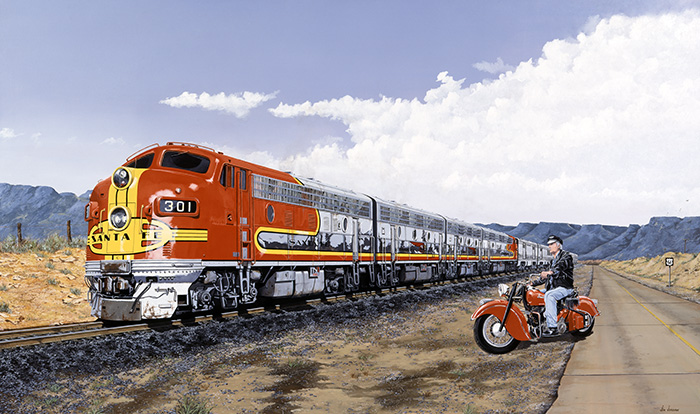 The Atchison , Topeka , & Santa Fe Railway was chartered in 1859 to join the two Kansas cities of its title with Santa Fe , New Mexico . In the 1870’s the California frontier was sought after by the Santa Fe which began a grand period of expansion throughout the west. Because of long stretches of main line through areas without water, the Santa Fe was one of the first purchasers of diesel locomotives for road freight service. The railway was also one of the first also to consider comfortable and affordable passenger service for long runs. From 1911 through the early 1950’s luxury service passenger cars were maintained from Chicago to Los Angeles . The “deLuxe” cars offered brass beds, barber and manicurist services, and even an exclusive “air-washing device” (primitive air-conditioning). The famous Harvey dining cars served only the finest of foods by impeccable Harvey girls hostesses. The debut of the “Chief” in 1926 and the “Super Chief” in 1936 made transcontinental travel inviting to many Hollywood stars for dining and blockbuster deals made in private. Just recently, in 1995, a merger with the Burlington-Northern Railway makes the lines of AT&SF a passing memory.

The Indian bike has been come to be known as America ‘s Pioneer Motorcycle. For the first two decades of the 20th century, the Indian was the world’s largest selling bike and held most speed records. For years it was the choice of vehicle for police use. But by the 1920’s the new automobiles began to take over the transportation market and so Indian’s management placed more emphasis on the bike for sports. Management changes (both good and poor) and military and police use kept the Indian on the road through the early 1960’s. The Indian trademark holds intense feelings of historical heritage for its loyal rides and thus it was included in this depiction with a 1948 Indian Chief.

Route 66 – called ” America ‘s Main Street ” and “The Mother Road,” was also described as “a road of phantoms and dreams” by writer Michael Wallis. For 40 years (1926-1966), and more than 2,400 miles of concrete and asphalt, spanning eight states from Chicago to Los Angeles all the names given it rang true. Route 66 proved the age old philosophy that the “journey is more important than the destination.” Romanticized in songs such as “Get Your Kicks on Route 66” and in the 1960’s TV series, the popularity of this highway crossed over several generations. Today there is a renewed enthusiasm to revitalize and restore 66 to its original allure … all that’s needed is for adventurers to rediscover it.

Through this Southwestern scene, artist Jim Jordan hopes to preserve the passing of these legends for future generations.