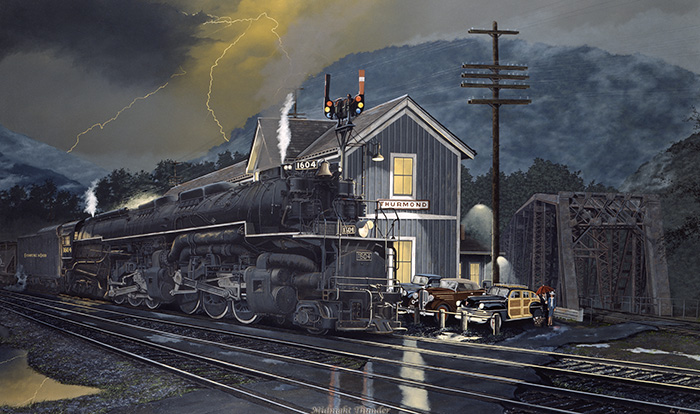 This scene depicts the powerful C&O “Allegheny” engine at rest during a late night summer thunderstorm in Thurmond , West Virginia .

Location: There are many legends and myths surrounding the ghost town of Thurmond in southern West Virginia. Now used as a put-in for whitewater rafting trips, it’s hard to even imagine that this town was once famous for its liquor, gambling, and coal. Thurmond is located in Fayette County, West Virginia . It lies on the north side of the New River , between Arbuckle and Dunloop creek. Thurmond is one of the more notorious of the coal towns built around the turn of the century in southern West Virginia . The depot at Thurmond was built in the late 1800’s. After the station burned down some time thereafter, it was rebuilt in the early 1900’s. This station was a major passenger and freight venue for the C&O. With its coal towers and shops, it was a prominent intersection for the KGJ&E and C&O rail lines.

Engine: The C&O “Allegheny” was one of the most powerful and heaviest steam locomotives ever built. In the early 1940’s the Chesapeake and Ohio needed new power on its Allegheny Division to move coal trains over the 80 miles of track from Hinton, WV east to Clifton Forge, VA. The design was a six-coupled, single-expansion articulated with 67” diameter drivers for speed, a 9’ X 15’ firebox with a very large boiler for steaming and 778,000 pounds of locomotive weight to assure tractive effort. The large firebox was placed behind the drivers and required a six-wheel trailing truck to support it. This gave the design a wheel arrangement of 2-6-6-6. The C&O had 23 of its “Alleghenies” equipped with steam heat and signal lines for passenger service, but they were used sparingly, pulling an occasional heavy mail train or troop train, during World War II. The “Allegheny” may have been the ultimate freight locomotive. They were able to achieve a very impressive record even though they were used in manner for which they were not designed. The boilers were capable of delivering up to 8000 HP. However, they were never used to their full potential. They “Allegheny” was truly magnificent in its role, but as good as it was it could not win the battle with the diesel. The C&O’s “Allegheny” was taken out of service beginning in 1952 with the last fire dropped in 1956.

Two of the C&O “Allegheny” type locomotives survive today in the Henry Ford Museum in Dearborn, MI and the B&O