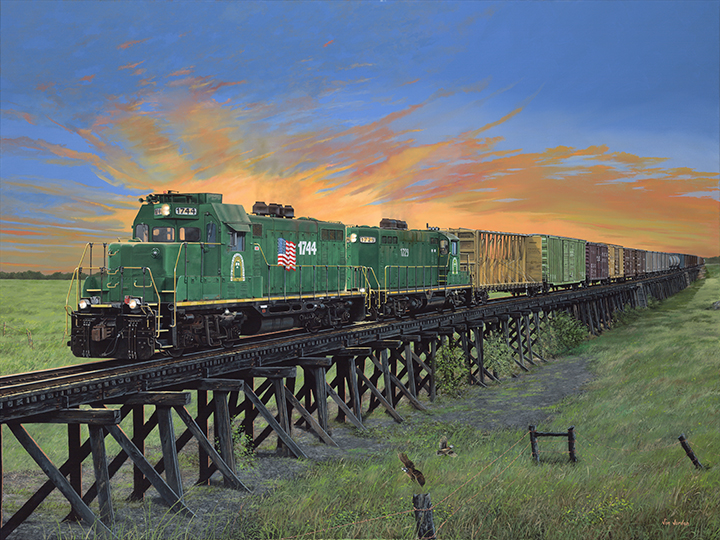 The Mercedes Floodway Bridge feels the weight of an eastbound train, operated by the Rio Valley Switching Company, speeding from McAllen to Harlingen, Texas.

The Mercedes Floodway Bridge feels the weight of an eastbound train, operated by the Rio Valley Switching Company, speeding from McAllen to Harlingen, Texas.  It will be interchanged there with the Union Pacific Railroad.  The train is being pulled by RVSC 1744 (GP7) and RVSC 1729 (GP16).  The cars would have previously carried a variety of bulk commodities including paper rolls, bundled lumber, maintenance of way ballasts and corn sweetener.  This depiction is located on the “Mission Sub” of RVCS’s mainline near milepost 14.7 on the west side of Mercedes, TX.

As the train catches the light of another southwestern sky, it spans the 1527 foot floodway bridge. The Rio Grande had flooded back in 1908 with Mercedes being one of the hardest hit towns in the area.  Years later, in 1952, The B & P Bridge Company was formed and a contract was signed for a new bridge.  The project involved directing the flood waters away from the flat delta around back to the Rio Grande River and the coast. Construction of the bridge was built over the floodway.  The Mercedes Floodway Bridge was completed in one year.