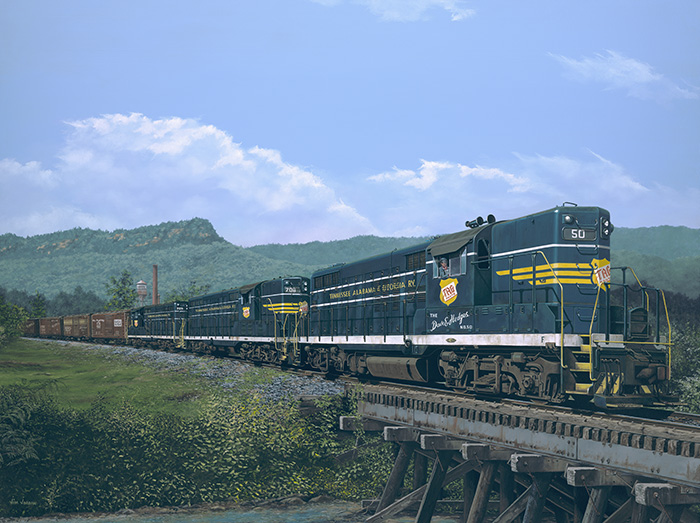 The “Dave E. Hedges” rumbles over the Rock Creek trestle at the foothills of Lookout Mountain and Eagle Cliff brow. Rock Creek meanders down from Lula Lake in the gap of the mountain and feeds into Chattanooga Creek in Alton Park. Yates Bleachery’s smoke stack and water tower, as seen in the background, coincidentally had been a customer for the TAG since 1921. It’s predecessor, Ledew Tannery had also been a customer and was one of the largest tanneries in the world.

The lead locomotive # 50, was a G.P -18, ordered by G.M. by EMD in 1959 and then was dedicated and put into service in Feb. 1960. Naming the engine the “Dave E. Hedges” and numbering it “50″ (out of sequence) was unusual – but it was in honor of the 50-year career TAG railroader and former president of the TAG Railroad. This picture depicts a TAG freight train #53 northbound at midpoint 8 – coming from Gadsden, Alabama and was just 7 miles – almost home – from the TAG yard, shops, and dispatchers in Alton Park – just south of Chattanooga center. The Dave E. Hedges is “ tag teaming” with two G.P.7 locomotives (707 and 708) which replaced the steam engines on the TAG lines.

The Tennessee-Alabama-Georgia (TAG) began as Chattanooga Southern in 1891, primarily from the efforts of millionaire/developer Charles E. James of Chattanooga. His idea was to develop iron ore, coal, cotton and timber in the region; but there was not enough traffic or revenues generated to continue with business as usual. It went bankrupt and in 1892 was reorganized as the TAG Railroad. In 1937 it was again changed to the TAG Railway. William H. Coverdale, famous tycoon of large steamship lines and representing a highly regarded railroad consulting firm, became interested in revitalizing the TAG after C.E. James died in the 1930’s. He helped to craft the TAG into a bridge route between the L & N and the various industries in Gadsden and Chattanooga. In the mid 60’s, Garrison Siskin, a great charitable figure in the Chattanooga area, helped the cause by buying Coverdale stock and gave scrap steel shipments to the TAG. In 1971 it became the subsidiary of the Southern Railway. At this point sections of the lines were abandoned and by the mid 1970’s the upper 23 mile track running south to Kensington, GA was farmed out to the Chattooga & Chickamauga shortline on September 11, 1989 primarily servicing the Reichold Latex Plant. Unfortunately now it appears that this plant is folding. The future of the track line is now questionable.

Artist Jim Jordan honors the fond memory of his uncle, James C. Mobley (his namesake) who was a fireman and worked his way up to engineer on the TAG. A true patriot, he served in the Army during WWI and drove an ambulance in France. Mr. Jordan dedicates this picture to his aunt and uncle who helped to raise him after his own father died and who nurtured his love of trains.