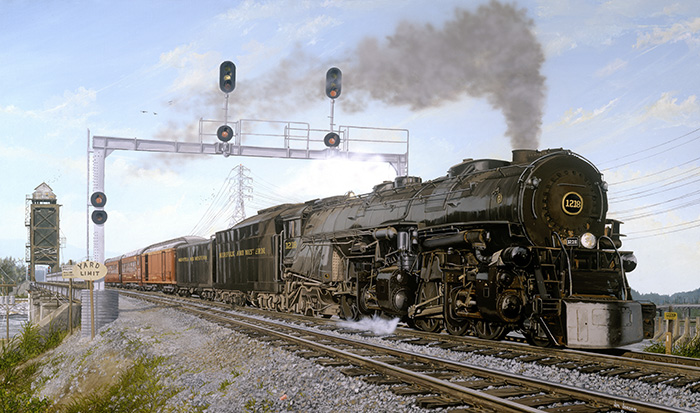 NORTH MEETS SOUTH when two historic rail-mates, the “1218” and the “Tenn” bridge, form a striking partnership of classic train regalia, as depicted by Chattanooga’s own train artist, Jim Jordan.

The “1218” steam engine (Class A 2-6-6-4) was built in the Norfolk & Western Roanoke Shops in 1943 during World War II at a cost of $163,872.00. After 16 years of service life pulling fast freight in the Ohio and West Virginia region, the “1218” was retired at Crewe, Virginia. Shortly thereafter, the engine was scheduled to be cut up for scrap. But fortunately, after several exchanges of ownership, the “1218” journeyed instead to the Roanoke Transportation Museum in 1970. Five years later the engine’s trek continued to the Steam Shops of Southern Railway in Birmingham, Alabama, where it was completely rehabilitated.

On March 26, 1987, the “1218” hit the rails again as the biggest member of Norfolk Southern steam fleet. It is currently running scenic tourist excursions throughout much of the Southeast.

Once only a primitive Civil War crossing over the Tennessee River, a double track bridge with vertical lift was designed and constructed by the American Bridge Company in 1911, just north of the city of Chattanooga. Commonly called the “Ten” by railroaders, the bridge’s total length is 1800;, stands 170′ from normal water level, and has a unique “open in” draw span of 310′ in length which raises vertically using large counter weights and cables.

This artist’s love of trains compelled him to use this particular scene of the “1218” crossing the “Ten” which is situated just below the TVA-Chickamauga Dam in Chattanooga, Tennessee. This oil-on-canvas is an authentic portrayal of two old-timers surrounded by numerous trademarks of the railroading life.