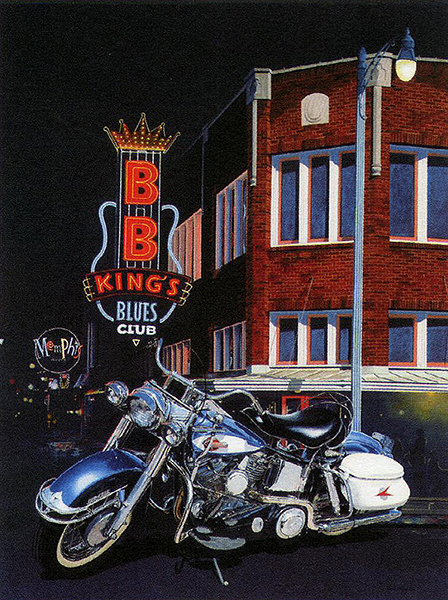 History of the Panhead

Panheads are motorcycles that were manufactured by the Harley-Davidson Company from 1947 – 1966.  During the years of World War II, Harley-Davidson engineers were busy improving the overhead vale Knucklehead engine.  Most of the changes involved the cylinder heads, which were capped by redesigned rocker covers that looked like upside-down roasting pans.  As a result, the revised engine became known as the Panhead – and with that, a new era at Harley-Davidson began.

W.C. Handy, “Father of the Blues,” once wrote:  “The seven wonders of the world I have seen, and many are the places I have been.  Take my advice, folks, and see Beale Street first.”  That was half a centaury before Congress declared Memphis ‘ Beale Street a national historic landmark.  Now recognized worldwide as the “Home of the Blues,” Beale Street has a cultural reputation rivaled by few other places in America .

Aspiring musicians flocked to Memphis to learn this new form of music called the “Blues”.  In late 1940, a young Mississippian joined in the amateur contests on Beale Street and soon developed a large following.  He traded his first name Riley for “The Beale Street Blues Boy” and today B.B. King is acclaimed as “King of the Blues.”

King opened his namesake club in 1991.  Although the club attracts blues fanatics from around the world plenty of locals frequent the club to hear their favorite acts.  The big man himself plays the club three or four times a year.  The rest of the time, first-rate blues acts pack the place nightly.

Artist Jim Jordan has chosen to paint the 1959 Panhead, seen here glistening against the midnight Beale Street shadows, the second in a series of motorcycle prints